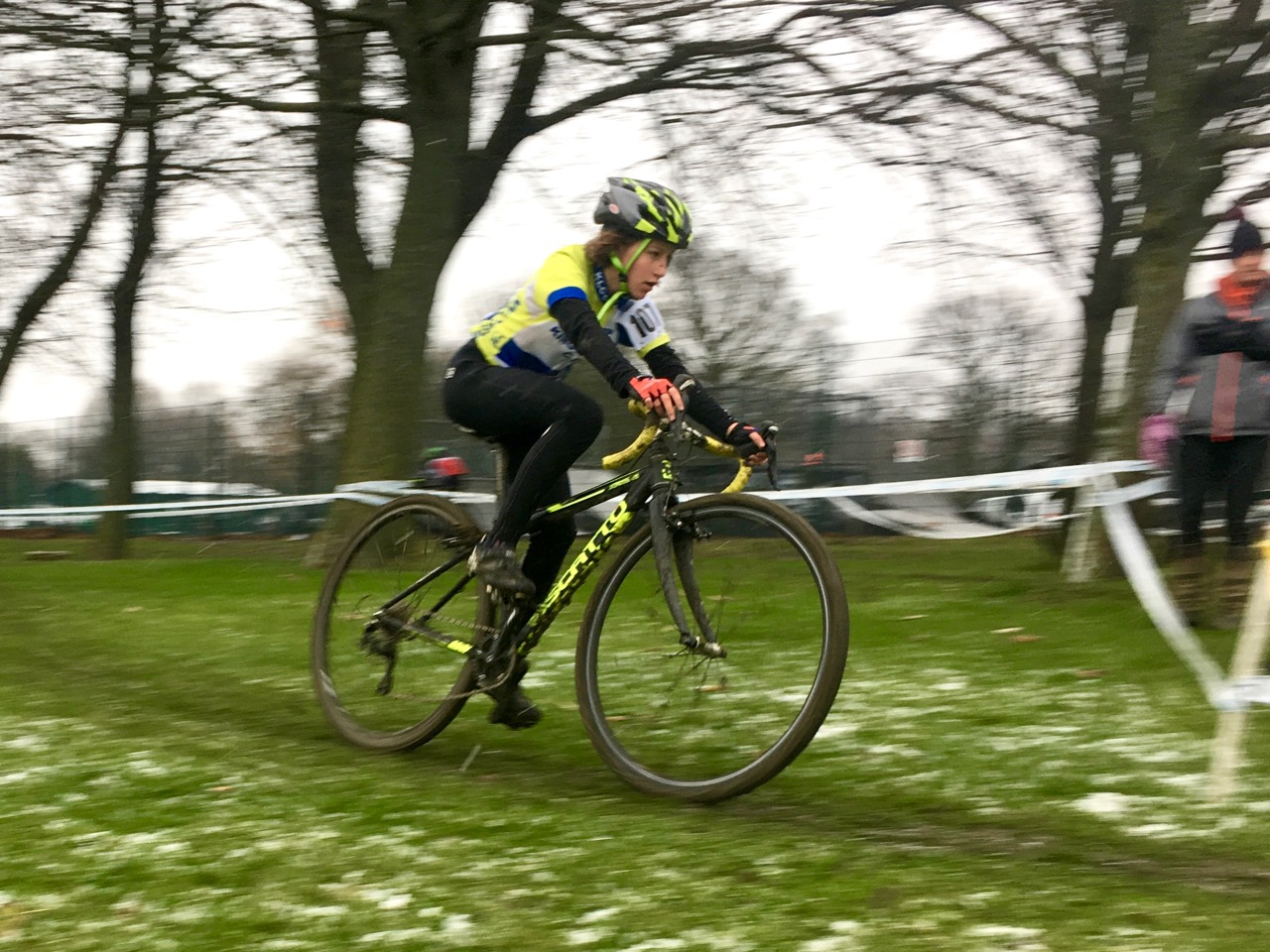 Or alternatively, a day (weekend) in the life of a National Trophy Cyclocross Race… …this weekend our children dragged us out on their never ending quest to bankrupt us and put as many miles as possible on the car – to take part in round 5 of the National Trophy Cyclocross Series. Braving the forecast snowpocalypse, we headed up to Bradford on Saturday to get in some course practice. Arriving in a blizzard, we got as much practice as possible before getting too cold and retiring to a warm hotel. The scene was set though with a proper cyclocross course – lots of mud, gradient and plenty of slippery off camber corners and traverses.

Sunday dawned cold, with the car claiming -1C. With the mud frozen, course practice revealed there was more grip than day before. Team Barnett shares two sets of race wheels between us – a set of intermediates and a set of mud tyres. With my race back to back with Bethany there wouldn’t be time to swap wheels so Bethany elected to race on the mud tyres, leaving me with the intermediates.

Ray was racing first in the Vet40s – a bit of a slow start saw me overtaking and picking off the odd place or two, mainly down to greater confidence through the technical sections thanks to course practice, with the intermediate tyres working well. However, with the pressure of all us Vet40s and Vet50s thundering over the course, the ground soon began to break up to reveal the mud underneath, and conditions quickly became significantly more slippery. Mud tyres were definitely the order of the day:
uphill sections that were previously rideable became traction free zones that required jumping off the bike and running with it; downhill sections became an exercise in point-and-hope-you-stay-on, as the bike slithered about underneath you. All worked really well until the last lap, when the accumulation of mud and leaf mould demonstrated why most Trophy riders use two bike and swap every lap on to a freshly cleaned one: my front wheel jammed with mud, forcing me to practice an unexpected and very rapid dismount. Time lost clearing the mud from the wheel cost me a couple of places, before dragging the bike back round to the finish.

Bethany also only has one bike, placing her at a major disadvantage compared to her rivals. To compensate we quickly fitted my intermediate wheels to her little sister’s bike, and raised the saddle as high as we dared. With two bikes to race on (kind of) she was all set. A slow start saw her hanging on with rivals, but as the mud built up she started to lose ground on them. Daring a bike change in the pits she swapped to little sister’s bike – leaving me to sprint from the pits to the jet wash area (imagine an area the size of tennis court, filled with petrol powered jet washes, all firing a spray of noise, exhaust fumes and mud and water around and that’s pretty much a jet wash area at a cyclocross race).

Washing the bike down is a race between trying to get as much mud out of the mechanicals as possible, but still have enough time to get back to the pits for Bethany to change back on to the clean bike as she comes past. Made even more exciting by our decision to do half lap changes (the course passes the pits twice every lap) in order to minimise the time she had to spend on her sister’s bike.

The gamble paid off – over the half lap Bethany stopped losing ground and began gaining it again. Repeating the process another couple of times seemed to be working, but as the course continued to deteriorate, little sister’s bike demonstrated that it couldn’t handle the seriously muddy conditions and the rear triangle clogged with mud and leaves, a few hundred yard from the pits. Bethany dismounted and sprinted up hill to swap back to her own bike, but sadly despite her best efforts, she couldn’t compete with riders who have two properly fitting bikes. Still awaiting confirmation of her position, but it was a useful learning exercise for how important two bikes are, and something to sort out for the National Championships in January, which are also likely to be extremely muddy. It will be even more fun next year when both Florence and Bethany will be competing in the same race, and will need two bikes each, complete with two sets of race wheels each.

The day was not yet done though, with the final member of Team Barnett yet to race. Somewhat disgruntled by being handed her pride and joy bicycle now resembling more of a bike shaped lump of mud, I was forced to race around the site looking for more water for our pressure washer – the water bowsers normally present were very conspicuous by their absence. Eventually sorted, Florence was back riding her now spotlessly clean bicycle, with a little time to warm up ready for her race. With no formal gridding Florence managed her amazing trick of miraculously appearing at the front centre of the grid, ready to race. The whistle blew and she was off racing on an unusually technical U12 course that also featured gradient and muddy off camber corners. Florence demonstrated her no-fear attacking style to utterly dominate the girls race and begin to challenge for the boys podium: finally finishing as first girl, having lapped the second placed girl. Not bad given this was her first week back from injury.

So with all medals and prizes collected, and the snow beginning to fall again, it was time to head back home to Norfolk. Although not before I was lucky enough to get to wash down all the bikes again, for the eleventy billionth time that day.

There are photos of Florence racing, but none of Bethany as the team photographer was otherwise occupied, either running with a muddy bike from the pits, washing a bike, or running with a clean bike to the pits.

This website uses cookies to improve your experience while you navigate through the website. Out of these, the cookies that are categorized as necessary are stored on your browser as they are essential for the working of basic functionalities of the website. We also use third-party cookies that help us analyze and understand how you use this website. These cookies will be stored in your browser only with your consent. You also have the option to opt-out of these cookies. But opting out of some of these cookies may affect your browsing experience.
Necessary Always Enabled
Necessary cookies are absolutely essential for the website to function properly. This category only includes cookies that ensures basic functionalities and security features of the website. These cookies do not store any personal information.
Non-necessary
Any cookies that may not be particularly necessary for the website to function and is used specifically to collect user personal data via analytics, ads, other embedded contents are termed as non-necessary cookies. It is mandatory to procure user consent prior to running these cookies on your website.
SAVE & ACCEPT