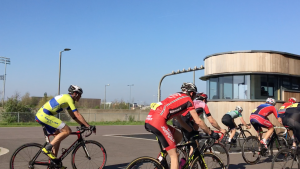 Why should the children have all the fun? The first Eastern Region Youth Circuit Series race sadly clashed with KLCC’s Open 25 TT and when it came to deciding which race to attend, I was comprehensively out voted. However, the same event was also hosting a 4th category race that I could enter, so why not?

So despite being one of the club’s Go Ride coaches, my background in racing is in cyclocross, TTs and triathlons. The sort of races that don’t see big bunches. Road racing isn’t really my thing, primarily from the fear that a crash at 30mph on a road is the kind of thing that costs you time off work, whereas most crashes in a cyclocross race involve jumping back on your back and re-joining the race. However, my wife was on hand to drive us home, and it’s half term, so how bad could it be…

Things started out well. I followed my own Go Ride advice and warmed up properly on the rollers prior to the race. At the appointed hour, they let us out on the circuit to ride half laps for everyone else to warm up, but also as a delaying tactic so they could attend to a casualty from the previous race. Sadly for both the casualty and for us, this took a while. In the end they called us off the circuit to wait. Eventually though, we were lined up on the start ready to race, albeit a slightly abbreviated race at only 40 minutes, to make up for the lost time.

The first lap round the short but undulating course was neutralised with a rolling start, and the race started properly as we crossed the line for the second lap. Surrounded by maybe 50 other riders was intimidating. Like the start to a cyclocross race only we were averaging 25MPH and taking corners shoulder to shoulder. Not every rider was that great at holding their line through corners. The bunch slowed into every corner, then surged out of it. Despite the relatively high average speed, sitting in the bunch meant much of the straights was actually coasting along. However, so focussed on keeping an eye on what was going on ahead of me, I missed that I was gradually slipping to the back of the bunch until I checked over my shoulder and realised there was no one else behind. So a bit of effort was required when the bunch surged and gaps opened up to try and find my way forward again. Not easy in a big group. Nobody at the front wanted to go hard and do all the work, so the pace stayed quite low and the bunch stayed together in one big mass.

And then maybe two thirds of the way into the race, it happened and there was a coming together in front of me. Riders locked up wheels trying to avoid riding into it. Fortunately I was far enough back that I was able to ride around it, and then it was a half lap sprint to get back in with the bunch before they got too far ahead. The rest of the race was relatively uneventful. The crash had thinned out the bunch so it wasn’t so scary a place to be. There were a couple of attacks at the front but no one joined in to form a break, and the bunch pace stayed low. It was going to come down to a mass  sprint. Even on the bell lap the speed stayed the same and I ended up leaving it way to late to start thinking about trying to move up in the bunch. On the final sprint I felt I had plenty of energy remaining and overhauled a few riders on the finish straight who were fading, but the leaders had finished some way ahead.

Overall, it was fantastic fun, and a huge learning experience. I survived. My fitness was easily up to it. We spend a lot of time in Go Ride sessions working on group riding so it becomes second nature for them to ride 12 abreast into a corner at speed, leaving them free to think about strategies and where they want to be. I need to practice what I preach.

ERYCS Round 1 at Lea Valley Velopark

This website uses cookies to improve your experience while you navigate through the website. Out of these, the cookies that are categorized as necessary are stored on your browser as they are essential for the working of basic functionalities of the website. We also use third-party cookies that help us analyze and understand how you use this website. These cookies will be stored in your browser only with your consent. You also have the option to opt-out of these cookies. But opting out of some of these cookies may affect your browsing experience.
Necessary Always Enabled
Necessary cookies are absolutely essential for the website to function properly. This category only includes cookies that ensures basic functionalities and security features of the website. These cookies do not store any personal information.
Non-necessary
Any cookies that may not be particularly necessary for the website to function and is used specifically to collect user personal data via analytics, ads, other embedded contents are termed as non-necessary cookies. It is mandatory to procure user consent prior to running these cookies on your website.
SAVE & ACCEPT